Tomato: a fruit or a vegetable?

It has never occurred to me which one is which until I overheard a conversation in the grocery department.  Tomatoes are a fruit?  No kidding.

Turned out I wasn’t the only one confused.

A fruit is the part of the plant that develops from a flower and contains the seeds.  Fruits are used mostly in sweet cooking and are most often served as a dessert or a snack. The following are technically fruits:  avocados, beans, pea pods, corn kernels, cucumbers, grains, nuts, olives, peppers, pumpkin, squash, sunflower seeds, and — who would have thought — tomatoes.   Blueberries, raspberries, and oranges are true fruits. 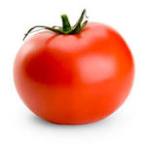 The other parts of the plants that don’t develop from a flower are considered vegetables.  Such as stems, leaves, roots, and even the flower bud.  Examples include celery (stem), lettuce (leaves), cauliflower & broccoli (buds), beets, carrots & potatoes (roots).

As far as cooking is concerned, vegetables, thanks to their savory nature, traditionally are served as a part of the main dish.   However, some technically fruits such as tomatoes or bean pods, may be called ‘vegetables’ because they are used in savory (salty or spicy) rather than sweet cooking.  The term ‘vegetable’ is more generally used of other edible parts of plants, such as cabbage leaves, celery stalks, and potato tubers.

WHAT IS A TUBER?

A tuber is a tip of an underground stem; this is the part of a potato that we eat.  Potato tubers have “eyes” or small nodes with buds; if placed in a warm location, the buds will sprout.

If a potato is left in the ground, it will sprout and produce more potatoes the next year.

I wonder if with a little bit of luck I can do this in my apartment.  No, really.  Some sites state that you can in fact grow potatoes in a container.  The one pictured was a size of the laundry basket.

Not that I need to grow them especially that I don’t eat much of them thanks to my diabetes.  After all, potatoes are starchy vegetables.  But my DIY nature takes over.  Hmm…  Might have a better luck with the green onions.

Here’s to the DIY potato fields.

1 medium tomato contains 3.2g sugar.  1 cup of sliced tomatoes contains only 5g of sugar that is one third of a carb.  Glycemic Index of a medium tomato is under 15 and so is the Glycemic Load.

A fresh tomato will likely not raise your blood sugar but tomato sauce could.  Tomatoes are also a source of vitamins, potassium and the antioxidant lycopene.

Potatoes are starchy vegetables.  Although potatoes contain a small amount of natural sugar, the starches will convert into glucose following a long digestive process.  Glycemic Index of potatoes is 90 thanks to the starchy content.  By comparison, GI of a table sugar is 59.

1 Response to Tomato: a fruit or a vegetable?