Arid – the tale of an old light bulb

Incandescent bulbs have been around for the longest time and could be bought at the most affordable price.  Remember 25c a piece?  These days are long gone, following a Light Bulb Law signed by George Bush in 2007.  Scroll up to 2014 when the old bulb was phased out, punished for not meeting the federal energy-efficient standards.  Gone for good?

Not so fast.  According to EPA, “any type of bulb can be sold as long as it meets the efficiency requirements”.  Consequently this applies to ANY bulb including incandescent, just as long as it complies with the Light Bulb Law.

So yes, the arid incandescent bulbs are still being manufactured and sold. The price however went up tenfold as it usually happens with a more efficient product. The consumer pays, one way or the other.

Some manufacturers get creative. 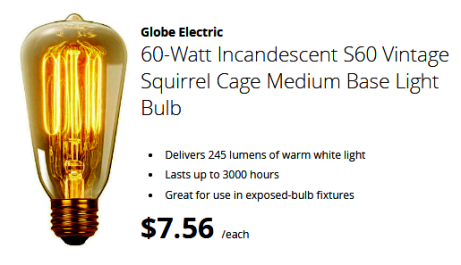 For example, Globe Electric concocted a 60 watt Vintage Style bulb that goes for $7.56 at Home Depot.

I miss the old arid incandescent bulbs and their respective prices dearly, as I don’t get along with the new mercury-containing bulbs.  Will post about that later.  Stay tuned.

This was initially written in order to describe the problems with CFL bulbs but edited to fit the Daily Prompt: Arid.

3 Responses to Arid – the tale of an old light bulb