First off, the word ‘neuropathy’ is a medical term.  When translating medical terms into English, you start from the end.  In this case, you start with the –pathy which means a disorder.  Neuro means related to a neuron or a nerve cell.  So neuropathy means disorder of nerve cells, usually the peripheral nerves as opposed to the central nervous system (brain & spinal cord).

Causes of neuropathy.  Most everybody assumes that a neuropathy is always a result of diabetes as a default.  This however can’t be taken for granted because there is a host of other conditions that can lead to a non-diabetic neuropathy.   Some of the neuropathy causes include rheumatoid arthritis, lupus, injuries, using crutches that can cause compression of the brachial nerve in the armpit area, chronic kidney or liver disease, some tumors that are pressing on the nerves, high alcohol levels, infections such as Lyme disease or Shingles, and some medications.  About 30% of neuropathies are of an unknown cause.  In my case, several neuropathies occurred long before I was diagnosed. 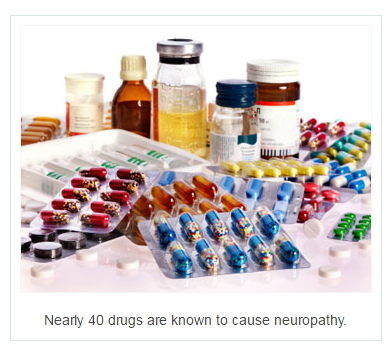 There are 4 major types of a neuropathy:  peripheral, proximal, autonomic, and focal.

Peripheral Neuropathy or nerve pain as it’s otherwise known, is the most common form.  It affects nerves leading to the extremities.  The nerves going to the feet are the longest in the body.  They tend to get damaged more often as there’s more to be damaged to begin with.  This can lead to the leg & foot problems.  Carpal tunnel syndrome is an example of the peripheral neuropathy.

The symptoms depend on which nerves are damaged and usually develop gradually.  They include numbness, tingling, cramps, muscle weakness and insensitivity to pain and/or temperature.  The symptoms tend to get worse at night; I know that is right.  I think that a foot drop that I had years ago, long before being formally diagnosed, was due to the peripheral neuropathy.  It had lasted a few months and went away on its own.

Proximal or Motor Neuropathy is the second most common type of diabetic neuropathy.  It affects muscles in the upper part of the legs, hips, buttocks, and thighs and can cause muscle weakness and nerve pain.  The pain can shoot from the low back & down the leg (sciatica).  As opposed to the peripheral neuropathy, this type usually resolves with time or treatment.  I hope that mine has resolved with time; I used to have shooting pain down the leg but it didn’t happen lately.

Autonomic Neuropathy.  Autonomic Nervous System is responsible for the function of internal organs and bodily functions that are not controlled consciously such as breathing, blood pressure, heartbeat, body temperature, digestion and metabolism.

This system has two parts:  sympathetic and parasympathetic.  The former prepares the body for stressful situations – fight or flight.  The latter controls body response during ordinary situations.   This makes me think that chances are, anxiety attacks can be due to the Autonomic Neuropathy when the fight or flight response happens at the wrong time which contributes to the state of anxiety.  I couldn’t however find a confirmation for this, so can only guess.

Autonomic Neuropathy can affect a wide variety of the body systems, and the symptoms largely depend on what specific nerves are damaged.   It can be dizziness after standing, irregular heart rate, trouble with night vision or during sudden light changes, digestive problems, and hypoglycemia unawareness that I blogged about last year.

Focal Neuropathy affects a nerve or group of nerves causing sudden weakness or pain most often in the wrist, thigh, or foot.

The symptoms depend on what nerves are involved.   If for example, the cranial nerves are involved, this can cause pain in and around one of the eyes, trouble moving the eyes, difficulty focusing, and double vision.  If a femoral nerve is malfunctioning, then one can experience weakness in the leg and difficulty going up and down stairs, especially down with the feeling of the knee giving way or buckling.

Unlike the other types of diabetic nerve pain, focal neuropathy comes on suddenly and the symptoms usually go away after a few weeks; these aren’t long -term symptoms.

Bottom line, diabetes isn’t the only cause of a neuropathy.  Non-diabetic neuropathy exists just as well.

7 Responses to Neuropathy, diabetic and non-diabetic